“I hate talking about what I’ve done and where we’re at – I don’t enjoy that bit,” Ole Gunnar Solskjaer said after his team beat Sheffield United, their last match before his two-year anniversary as Manchester United manager.

“I always look forward and I know there’s a lot of work to be done still to get to the standard and level I want. That’s what we’re working for every single day. I’ve really enjoyed these two years.”

That win at Bramall Lane actually summed up life under Solskjaer nicely. There was fast, ruthless attacking, errors aplenty in their own half, uncertainty around the system being deployed… but still, another away win, one certainly not short on entertainment.

United have definitely embraced Solskjaer’s commitment to exciting football matches, even if that hasn’t always been in a positive sense for fans. After two years of watching the Red Devils, you are never quite sure which team is going to turn up: the organised counter-punchers that won four of six games against Manchester City; the clinical destroyers that thumped Chelsea and RB Leipzig and won at Paris Saint-Germain twice; the miserable plodders that lost at West Ham, Newcastle United, Bournemouth and Watford from September to December last year without scoring a goal; or the logic-defying lunatics who were battered 4-0 at Everton and 6-1 at home to Tottenham.

Still, Solskjaer has survived his team’s inconsistent form by adopting a relentlessly optimistic tone, espousing the improvements in fitness, morale and style since the wretched final days under Jose Mourinho, while championing a third-place finish and three cup semi-finals last year.

While that positivity is not always wholly justified or believable, it is true that, two years after replacing Mourinho on an initial interim deal, United are in a stronger position – even if, as Solskjaer says, there is plenty of work left to do.

United have played 110 games under Solskjaer in all competitions, winning 61 and losing 27, giving them a win rate of 55.5 per cent. In the post-war era, only Mourinho (68 wins, 61.8 per cent win rate) has had a better record in his first 110 matches in charge.

In all-time numbers, Solskjaer is only 4.2 per cent short of United’s win rate under Alex Ferguson, who oversaw 897 victories from 1,503 games. Aside from Mourinho, Solskjaer’s is the best such rate of the men put in charge since Ferguson’s retirement seven years ago.

The big let-down has been in the Champions League, where United have lost six of their 10 games under Solskjaer, marking the worst record of any manager of an English side. Two of their four wins, famously, came in Paris, and it’s an accepted fact that United tend to be better away from Old Trafford under Solskjaer; indeed, they are on a club-record run of 10 consecutive league wins on their travels. In all competitions, they have won 33 of 56 away games compared with 27 of 51 at home.

Solskjaer has often found it easier to achieve convincing results against stronger sides (see his unrivalled record against Pep Guardiola). That said, against the Premier League’s so-called ‘big six’, he has won six of his 19 matches, scoring 18 goals and conceding 25. That win rate of 25 per cent is well above David Moyes (six per cent), but down on Mourinho (31 per cent) and Louis van Gaal (36 per cent) in the post-Ferguson years. 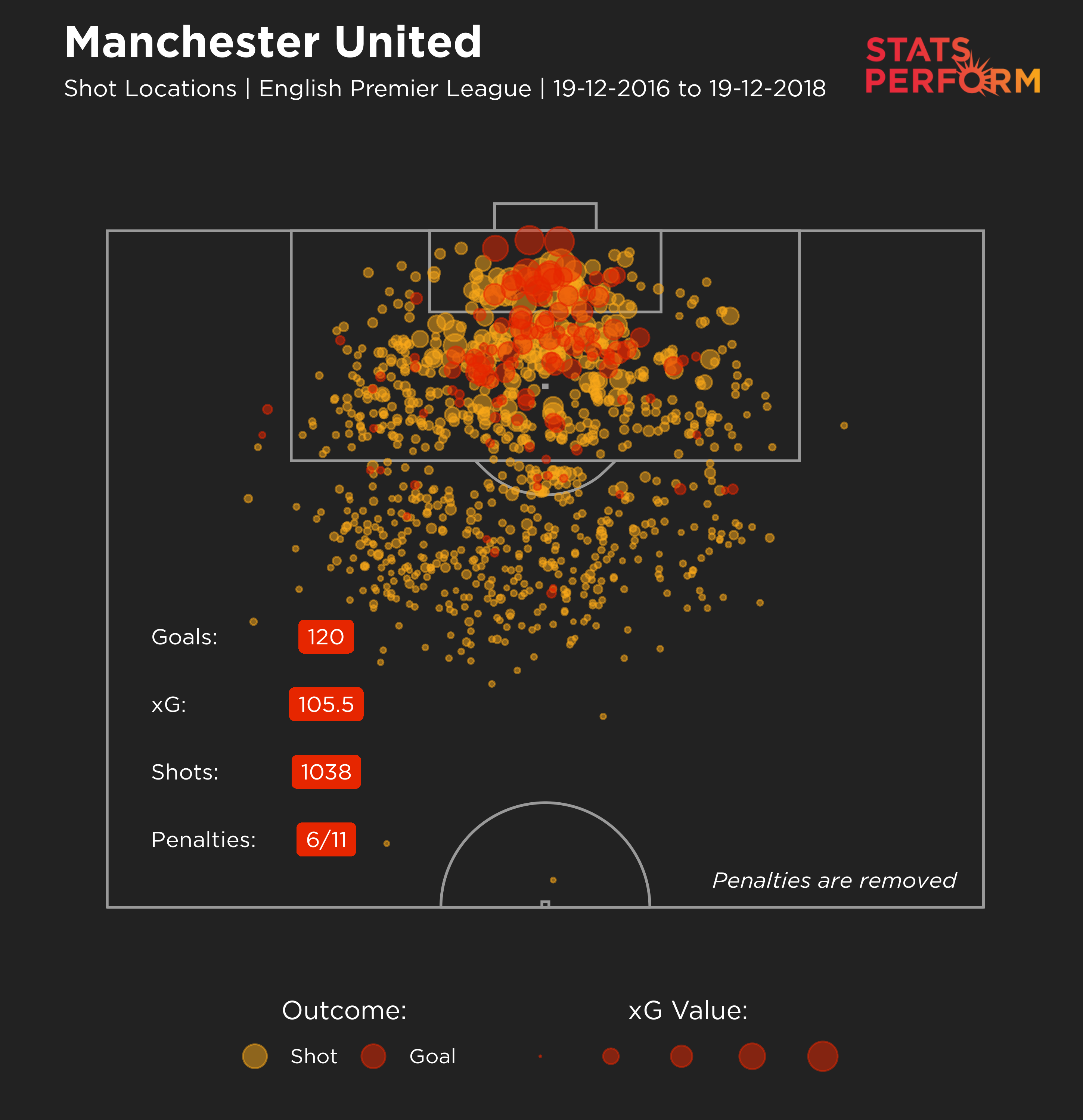 THE UNITED WAY, OR THE HIGHWAY

There was a toxicity around United during Mourinho’s final few months in charge and Solskjaer’s first major task was to fumigate the place and get fans and players enjoying football again.

While consistency of performances and results remains elusive, United have certainly embraced a bolder way of playing under their former striker.

Since he took charge on December 19 two years ago, only Man City and Liverpool have scored more league goals than United’s 124 – and that indicates a common trend.

United are fourth for created chances (755), passes ending in the final third (11,006) and attempted shots (1,019) over the past two years. The top three in those categories are Man City, Liverpool and Chelsea. 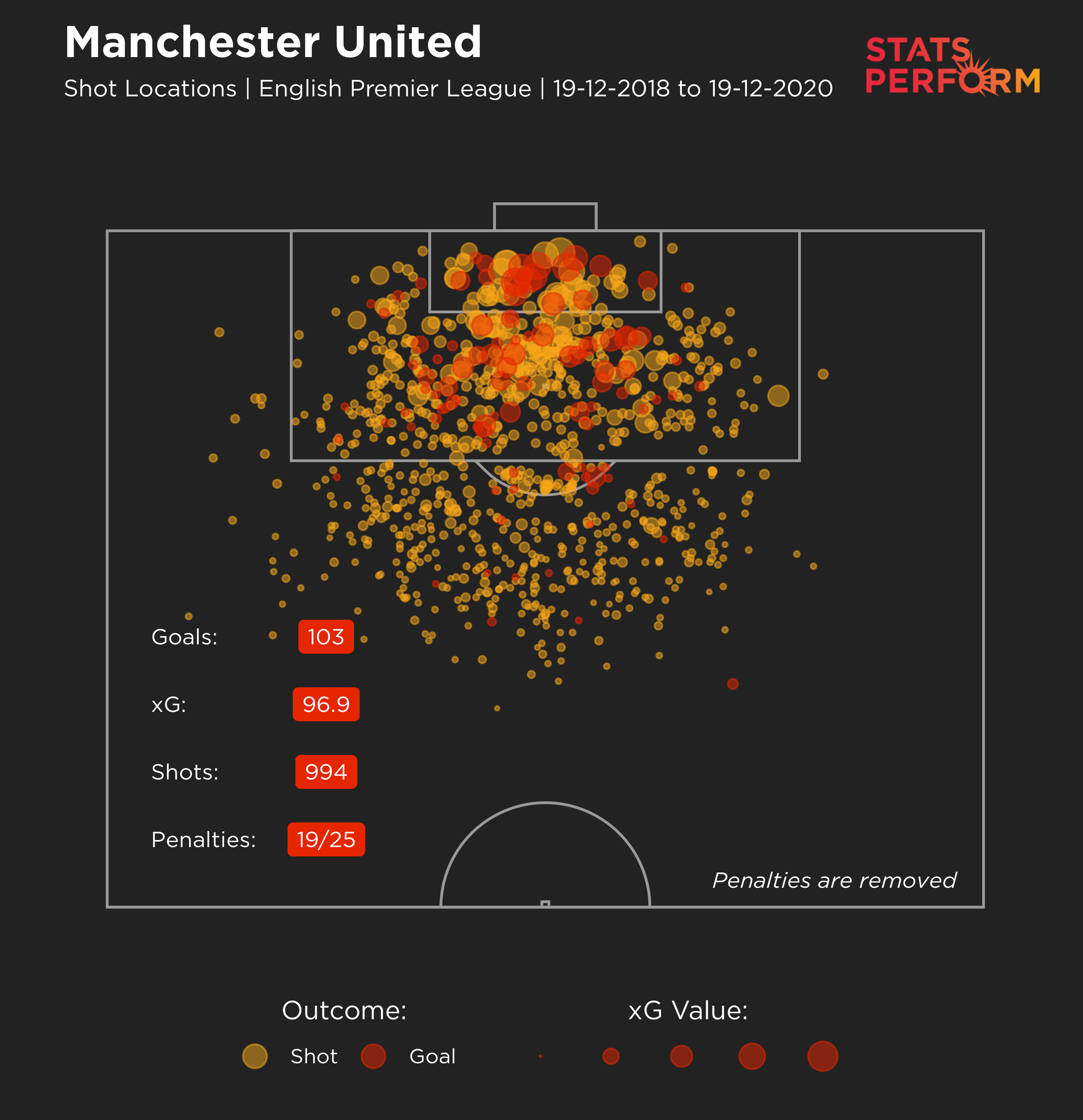 When it comes to ruthlessness, only City and Liverpool boast more shots on target than United’s 403, of which 16.3 per cent have ended in goals. That’s reflected in their expected goals tally, which indicates they have scored 103 times (excluding penalties and own goals) when realistically they would have been expected to score 97.

Still, in the two years prior to Solskjaer’s appointment, United’s xG was 105.5 and they scored 120 times in the league, which shows their forward line has some room for improvement if they are to become serious contenders at the summit of English football again. 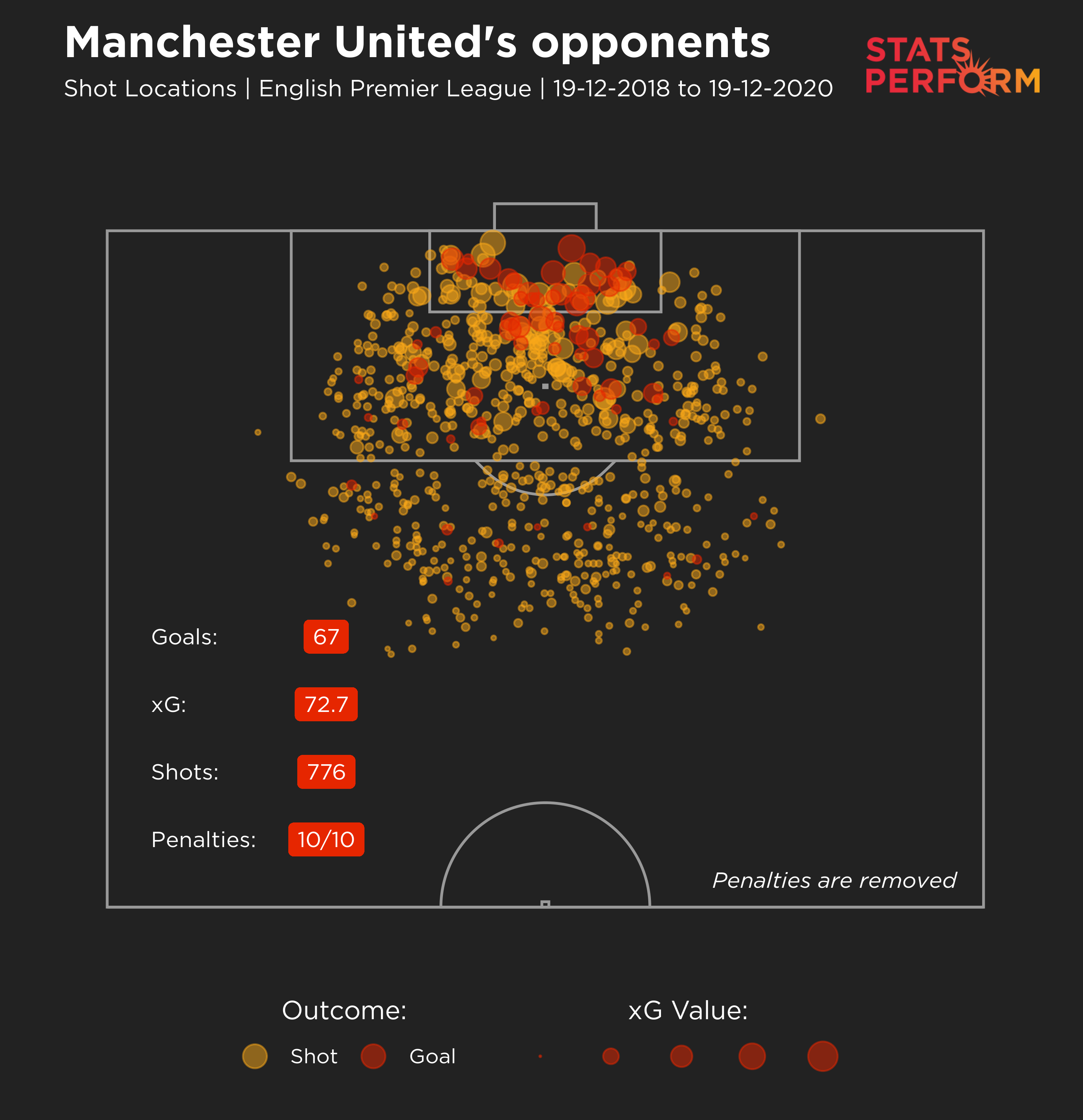 DID HARRY TRANSFIGURE THE DEFENCE?

United finished third last season, a remarkable 33 points behind champions Liverpool, but they were second-best for defeats (eight) and third-best for goals against (36). Only Burnley, Liverpool and Man City kept more than their 13 clean sheets.

Whatever your thoughts on Harry Maguire’s £80million price tag or Aaron Wan-Bissaka’s attacking acumen, there is little doubt United have become stronger defensively under Solskjaer.

Their expected goals against in league football under the Norwegian is 72.7, with their actual goals against tally at 67 (ignoring penalties and own goals), which is not a huge discrepancy. And, while they only conceded 58 league goals in the two years prior to Solskjaer’s appointment (again, leaving aside penalties and own goals), their xGA stands at 77.8 for the same time frame. That tells you they should realistically have conceded around 20 more goals but were mostly bailed out by David de Gea enjoying career-best form. 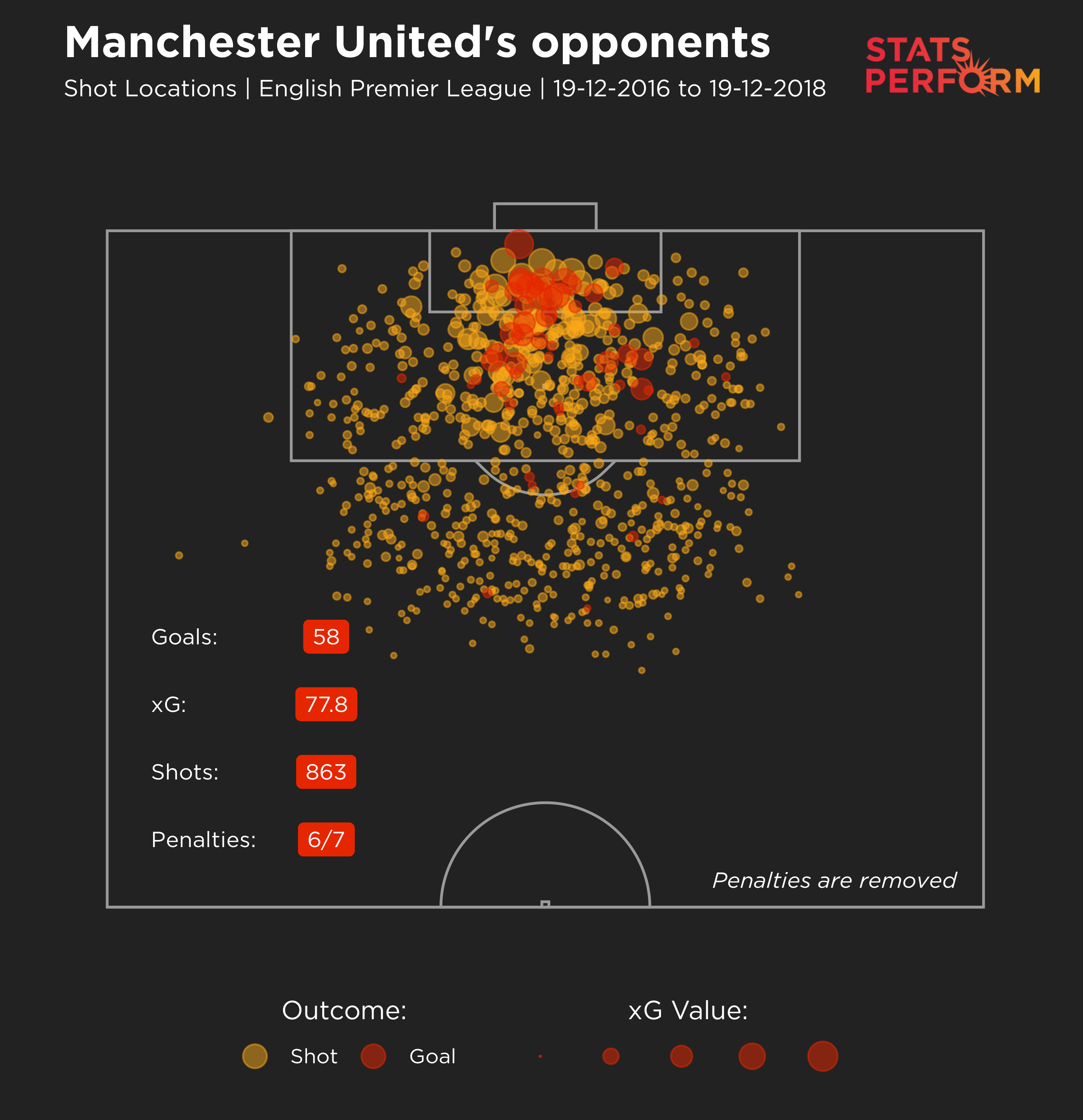 Solskjaer’s first full season in charge was defined by the arrival of Bruno Fernandes last January, the catalyst for a 19-game unbeaten run that propelled them into two cup semi-finals and back into the Champions League.

Fernandes has been directly involved in 37 goals for United (23 scored, 14 assisted), behind only Anthony Martial (43) and Marcus Rashford (57) during Solskjaer’s reign, despite being at the club less than a year.

Since the Portugal star’s debut on February 1, United have taken 55 points from 26 league games, second only to Liverpool, who have played a game more in that time. Their home form continues to hold them back somewhat (they took 20 points from 13 league games at Old Trafford in that time frame), but nobody can match their 35 points and zero defeats on the road.

8 – Only one player has created more chances in a single match in this season’s Premier League than Bruno Fernandes did against West Ham today and the United midfielder only played 45 minutes. Conductor. pic.twitter.com/1LH5KWZqeS

Disappointing results and defensive frailties have been an issue in 2020-21, but there are qualities to United’s play that are seeing them through. In fact, while concentration levels may have slipped towards the back, a sharpened focus at the top end of the pitch is paying dividends.

In the league, United have managed 42 high turnovers of possession, with 10 of those incidents ending in a shot (24 per cent). Only Man City (28 per cent) have a better ratio.

There has also been a critical impact from Rashford, the player to play in the most matches (91) under Solskjaer, whose two goals helped them to beat Sheffield United and who has begun to share Bruno’s burden when it comes to carrying his side. 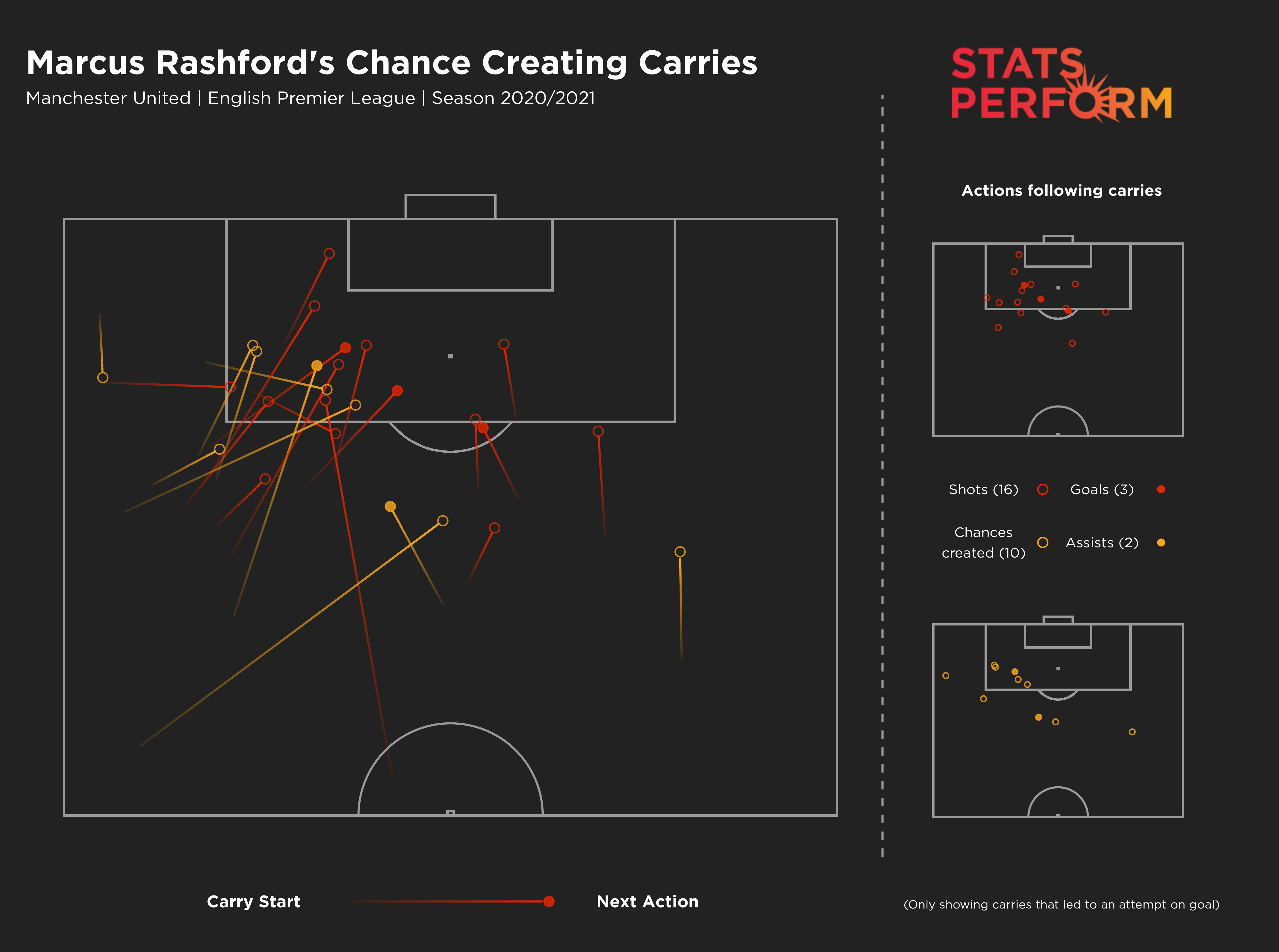 Rashford has five goals and four assists this season, just two goals behind Fernandes, despite being troubled with a shoulder injury and a persistent change in the attacking line-up around him.

Pertinently, the England star has managed 16 carries ending in shots in 2020-21, the most in the Premier League. Three of those have resulted in goals, behind only Jack Grealish (four) and Son Heung-min (nine).

United have a game in hand on the five teams above them in the table which, if they win, will take them to within two points of leaders Liverpool. There are still questions to be answered and doubts to be dispelled around Solskjaer’s long-term suitability to the role, but he does at least have United on track to competing with the very best once again – even if the route back to the top is a circuitous one.

Knicks get off to fast start in victory over Warriors