Frank Lampard is convinced Timo Werner will become a Premier League hit, with the Chelsea boss vowing: “He will score a lot of goals for us.”

Four goals and four assists from 14 league games is a modest return for a player whose 28 goals and eight assists in the Bundesliga last season made him a must-get player for the Blues.

Lampard’s faith in Werner is nevertheless absolute, exemplified by the fact the German forward has started every league game this season for Chelsea, who head to struggling Arsenal on Boxing Day.

Where could be better to get back to scoring ways than at Emirates Stadium, where Arsenal have struggled desperately for results this season?

“Clearly, as a striker, you want to be scoring all the time, because you get judged,” Lampard said. “The positive thing is he’s getting chances in games, using his attributes to get in the box and using his speed to get chances, so they’ll come.

“I know he wanted to come here and be a success, I know he understood the rigours of the Premier League. He’s getting lots of chances and he will score a lot of goals for us.”

There has already been plenty to pick over from Werner’s performances in England, and the data from his early months shows qualities that Lampard will admire, alongside detail that may provide cause for concern.

‘TURBO TIMO’ IN A HURRY TO IMPRESS

Werner has played 1,207 minutes in the Premier League and has recorded 260 sprints, ranking fifth in that category among all players this season.

Clearly, Werner’s relatively low Premier League goals return has not been for the want of trying. He has travelled 145.7 kilometres in those 14 appearances, which is the most of all strikers during the 2020-21 campaign. Liverpool’s Roberto Firmino (145.6km) is close behind Werner, followed by Tottenham’s Harry Kane (144.1km).

Of all Chelsea’s players, only N’Golo Kante has covered more ground, the workaholic midfield operator having travelled 158.6km.

Those figures reflect well on Werner, but in other areas we can see that he is finding it a challenge to adapt to English football. 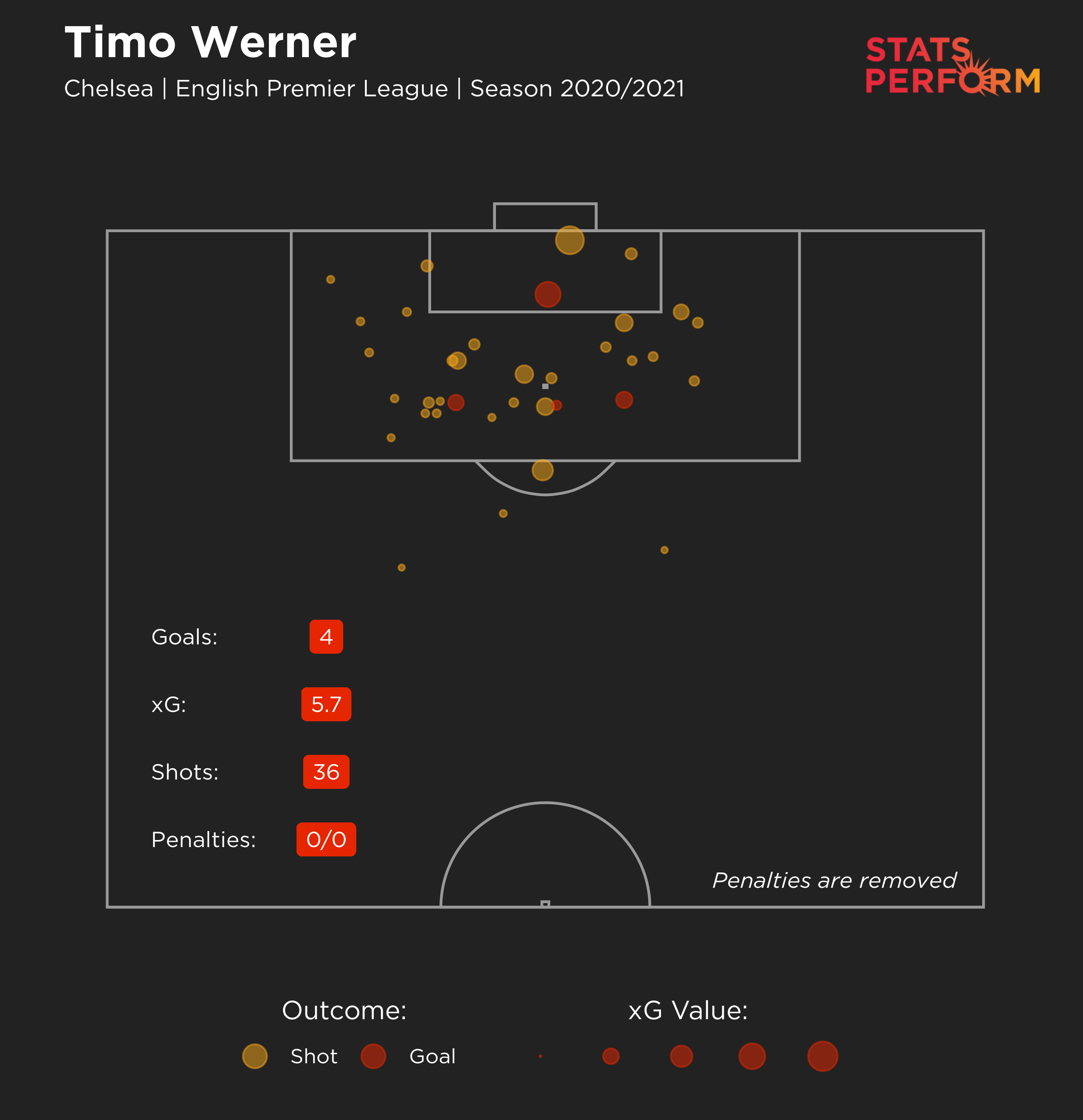 QUITE THE CARRY ON

A player moving with the ball for at least five metres is defined as a carry by Opta, and last season Werner had 44 carries with shots, which put him top of the pile in the Bundesliga, 10 clear of nearest challenger Serge Gnabry.

This season, however, he has had seven carries with shots, joint 21st in the Premier League, and eight carries with chances created, which puts him in a tie for sixth place.

His touches in the opposition box have fallen from an average of 7.65 per game in the 2019-20 Bundesliga with RB Leipzig, to 5.64 in the Premier League at Chelsea.

He has fallen short of an expected goals (xG) return of 5.7, which is based on the quality of the chances that have come his way, yet outperformed that metric last season when scoring 25 times, excluding penalties, from an xG of 19.

If Chelsea thought they could parachute in his productivity, it appears they were wrong.

A goal machine in Germany he may have been, but just now Werner has plenty to prove to his doubters in England. 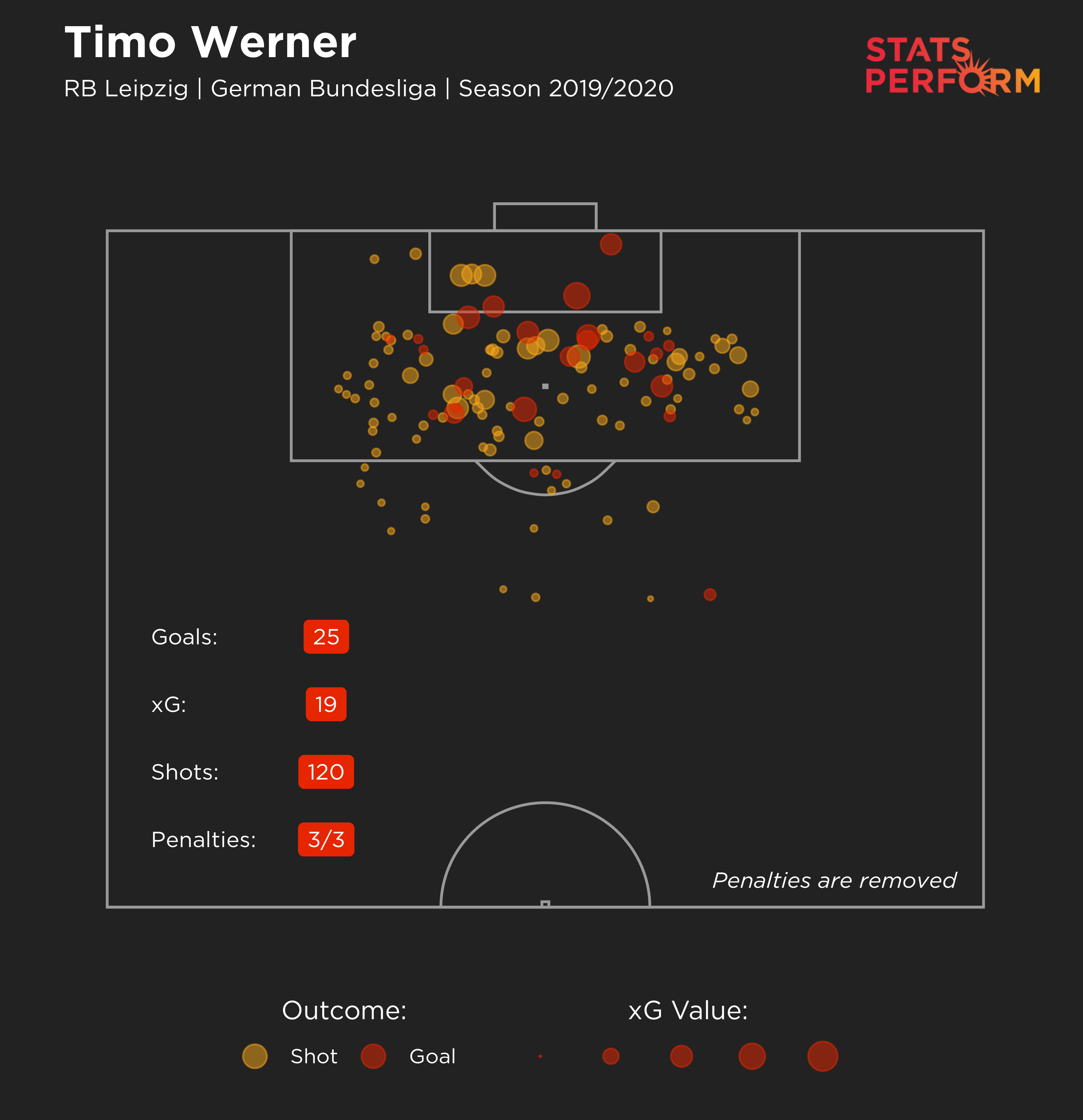 Werner is not the only Bundesliga import struggling, and Chelsea could do with the real Kai Havertz standing up.

Given he cost Chelsea a fee in the region of £70million when coming in from Bayer Leverkusen, Lampard would have anticipated more than one goal in his first 12 Premier League games.

Havertz’s role at Chelsea may not be exactly as it was at Leverkusen, but he is spending the bulk of his time in the same areas of the field and not coming up with the same goods.

Averaging 0.9 shots per 90 minutes for the Blues compared to 2.16 in the 2019-20 Bundesliga is an early worry, as is him having just two big chances to the 18 he had in his final campaign with Leverkusen. It equates to him have one big chance every four league games for Chelsea, when he had two every three last season.

Havertz’s involvement in the area has also decreased, with his average of 2.1 touches in the opposition box per 90 minutes in the Premier League comfortably shy of the 5.1 he had in his previous campaign at Leverkusen. 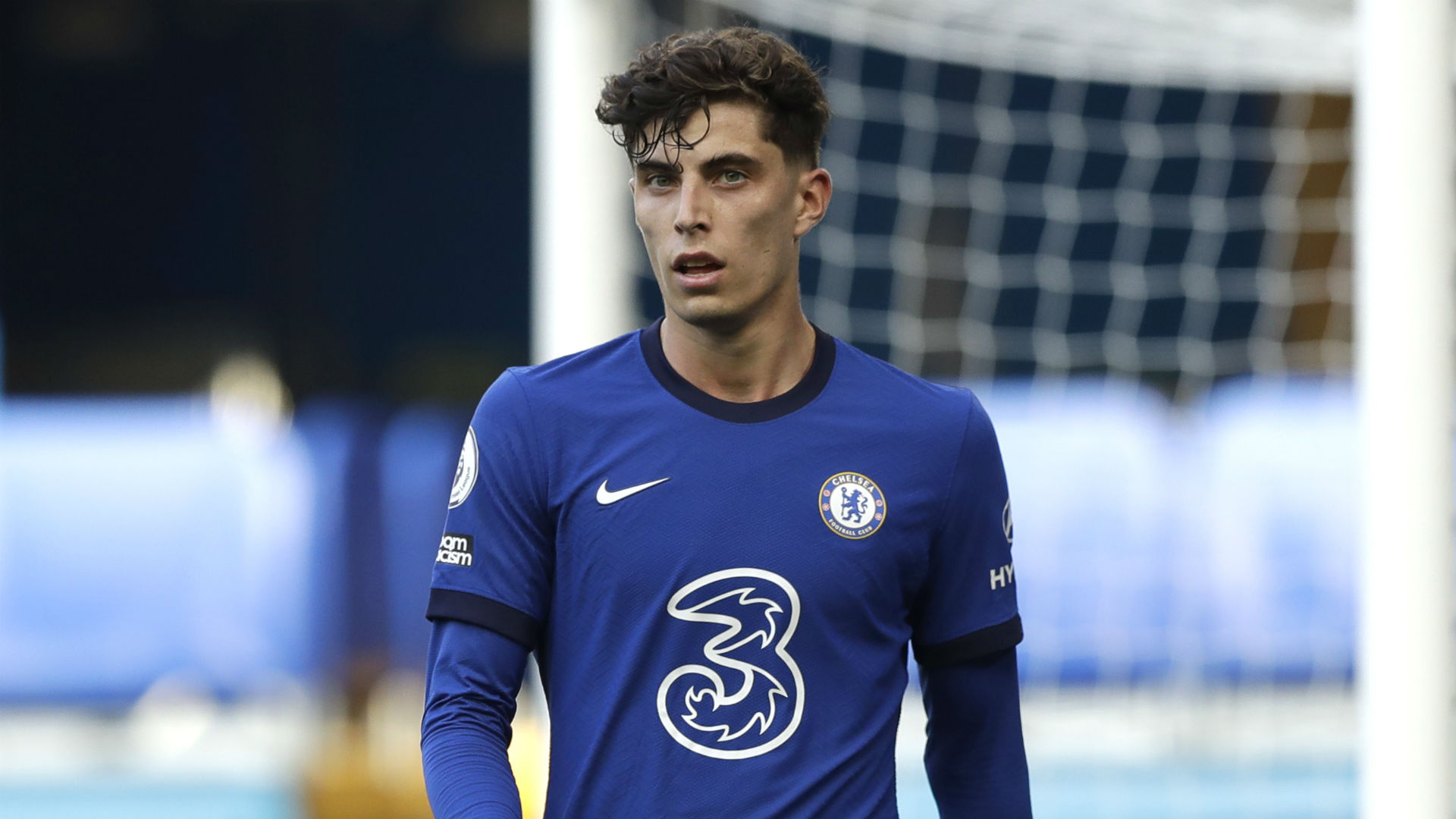 SHOCK TO THE SYSTEM

Perhaps the culture shock aspect is being underplayed. Werner and Havertz have shown for their previous clubs that both are first-class young talents, and in a year’s time the perception of both could be wholly different in England.

This has been a strange year for everybody, and to be moving to a new country amid a pandemic could be a jolt that even Premier League wages cannot quite cushion as some would like.

Leverkusen and particularly Leipzig played a quite different game to Chelsea, with Lampard’s methods different to what both knew at their previous clubs.

In the Premier League this season, Chelsea are averaging 19.1 open play sequences of 10 or more passes in a game, compared to just 11.6 at Leipzig last season and 17.5 at Leverkusen.

Their overall passes per sequence under Lampard’s instruction is higher too, averaging out at 4.7 to the 3.7 that Werner experienced at Leipzig and the 4.1 Havertz was familiar with at Leverkusen.

The German sides also posted higher numbers in the direct speed and directness metrics compared to Chelsea in 2020-21.

Perhaps Arsenal would want to face underachieving players in Saturday’s big London derby, given the Gunners have so many of their own flops this season.

Werner and Havertz should still come good over time, and Chelsea can just about afford to be patient with both.

As Lampard said, however, players “get judged” in England, perhaps sooner than happens elsewhere. It is time this recently vaunted pair shed their Premier League underachiever reputations.

James Harden gets triple-double in debut as Nets clip Magic

Pistons blow out Heat in second half for first road W