Finally, 2020 is history – there won’t be many people who aren’t happy to see the back of a difficult year.

While the coronavirus pandemic shows no sign of making a swift exit, the turn of the year at least gives us the chance to look forward, and the same is true in the world of sport.

2020 saw many promising young players make the step up, some undoubtedly down to the absences caused by coronavirus or the packed schedule that the pandemic has led to.

We’ve picked out 21 under-21 players to keep an eye on in 2021 – and while you may already be familiar with some of them, there’s good reason to give them your attention this year…

Few goalkeepers can come away from a 6-2 defeat having impressed, but Meslier did so against Manchester United recently. His eight saves prevented Leeds’ crushing loss from getting even more embarrassing, while only three goalkeepers have produced more in a single Premier League match this term. His total of 63 is also the second most in the division – the France Under-21 talent, who joined on a permanent deal from Lorient last year, appears to have a big future ahead of him.

Goalkeepers tend to break through a little later than outfield players, but Norway youth international Klaesson has already been first-choice at Valerenga for the best part of 16 months – he only turned 20 in November. Coincidentally, he could have become a team-mate of Meslier’s in 2020 as Leeds were reportedly interested, but he remains in Norway for the time being.

Saliba is certainly one of the most recognisable names on this list – after all, he has been owned by Arsenal for getting on for two years. Unfortunately, he has not been afforded much of a chance by Mikel Arteta this term, which makes him an interesting prospect to watch in 2021. Either he’ll eventually get an opportunity at the Gunners, or a loan move will provide him with a crack at first-team football. After a tricky 2020, he’ll want to get his career back on track.

Given his appearance, playing style and the fact he has come through Ajax’s academy, comparisons between Schuurs and Matthijs de Ligt were to be expected. He may not reach the Juventus star’s level, but he has certainly shown real promise that is reportedly interesting Liverpool. Schuurs is one of the five youngest players to have featured for at least 500 minutes in this season’s Champions League, while his 47 ball recoveries was the sixth highest of any player in the group stage.

17 – Since the 2016-17 season, Perr Schuurs is the defender with the joint-most goals for Dutch teams in all competitions (17, level with Denzel Dumfries). Precision. pic.twitter.com/bgWsQ3Dlz0

Aaron Wan-Bissaka was supposed to fix Man United’s issues at right-back, but this season his defensive positioning has been concerning and he appears to have become even less effective in attack – his chances created and open-play crosses per 90 minutes have decreased significantly. Laird has long been considered a fine prospect at United and boasts the technical abilities to be a threat in attack. If he can stay fit, chances could be in the offing.

Having joined Brighton last January from Chelsea, Lamptey has quickly made a name for himself as an exciting wing-back. Last year saw the diminutive talent enjoy something of a breakthrough, but in 2021 he’ll be looking to truly establish himself and potentially break into the England squad. There are few more exhilarating full-backs in the Premier League – his 3.8 dribbles per game is the third most among defenders to have featured more than twice.

2 – Tariq Lamptey (Chelsea and Brighton) is the first teenager to feature in a Premier League game for two different clubs in the same season since Harry Kane in 2012-13 (Spurs and Norwich). Switch-up. pic.twitter.com/A7SK3RjnYS

Sporting have a wealth of talent coming through at the moment and left-back Mendes is arguably chief among them. Blessed with fine technical abilities, the 18-year-old is apparently a target for Man United, Liverpool and Real Madrid. Already a regular having started 10 of the Primeira Liga leaders’ 11 games this term, Mendes’ 10 completed dribbles is the fourth-highest among defenders in the division, while his 28 interceptions is second only to team-mate Luis Neto.

An intriguing player with a well-rounded skillset, Menino has already transitioned from centre-back to defensive midfield to right-back despite his young age. It is in the latter position where he impressed enough to earn a first Brazil call-up last year and only two players have provided more than his five assists in the 2020 Brazilian Serie A.

The past month or so has seen Caicedo brought to the attention of a wider audience – or, more specifically, Manchester United fans. The all-action midfielder was the teenager with the most goals (four), shots attempted (24), chances created (19), successful passes (748) and dribbles completed (23) in Ecuador’s top flight in 2020, while his passing accuracy of 90.1 per cent was the highest among players to attempt 500 or more.

Scottish talent Gilmour had shown real promise during his 11 Chelsea appearances last season before a knee injury in July laid him low. He returned to action last month with a few cameos off the bench, and there will be plenty hoping he can return to his previous level quickly. A loan move might be on the cards, but Frank Lampard has high hopes for the crafty midfielder.

Valencia are going through another difficult spell, with off-field matters often overshadowing on-pitch performances. Nevertheless, in United States international Musah, they appear to have a reason for optimism. Another tricky winger, Musah’s 38 dribbles is the second most among Los Che players this term and he became their youngest LaLiga goalscorer (17 years, 338 days) this century when netting back in November. He’s one that got away from Arsenal.

1 – Aged 17 years and 338 days, Yunus Musah has become the youngest player to score for @valenciacf_en in @LaLigaEN in the 21st century, breaking the previous record held by his current teammate Lee Kang-in  (18y 218d). Future. pic.twitter.com/tpW8DNw2Kc

A nimble right-footed left-winger, Barrenetxea broke into La Real’s senior side last season with 17 appearances in LaLiga. His eight starts this term is already an increase of five on the entirety of 2019-20 and he has been using that extra time on the pitch to excite. He has attempted 41 dribbles in LaLiga, and his 56 per cent completion rate is bettered by only seven players – all of whom are much older – among those to have tried at least 40.

If Barrenetxea embodies the modern ‘inverted winger’ style, then Bryan is very much a wide midfielder of the classic variety. A direct touchline-hugger, the left-winger’s aim is almost always to beat his man and get a cross into the box, and he is catching the eye on loan at Eibar this term. Only five wingers in LaLiga can better Bryan’s 49 open-play deliveries, though his 22.5 per cent accuracy is better than all but one of those with more cross attempts. He’s also tried 44 dribbles, his 52.3 per cent completion putting him close to Barrenetxea.

S.XXI – Bryan Gil is the first player born in this century to provide an assist in the Top 5 European Leagues. Academy pic.twitter.com/MZn7ZRiNTk

Campaz may not be a household name yet, but a move to Europe or one of South America’s leading leagues is surely not far away. The attacker, who can play wide or through the middle, is an explosive player but also productive. No younger player had more goal involvements (five goals and four assists) and chances created (32) in Colombia’s top division than Campaz.

Although United splashed a reported £19million on Diallo, the young Ivorian remains something of an unknown quantity. A left-footed right-winger, he has only been given a handful of opportunities in Atalanta’s senior side – though he has often caught the eye with his ability on the ball. Given United’s lack of options on the right flank, he might just establish himself sooner than some expect – either way, he will be one to monitor.

As each week passes, more and more Pedri looks to be settling into the role as Lionel Messi’s heir at Barcelona, but whether he’s ready to take up such a mantle as early as this year is another matter. Messi’s contract ends in June and so he could well depart – taking on his creative burden would be an unenviable task for a teenager, though Pedri is proving effective. He is creating a chance every 45 minutes on average in the league this term, the third most frequent in the squad among those to have played at least five times.

Are you really a Brazilian ‘wonderkid’ if you’ve not been linked with every major European club? Talles Magno fits the bill there and it’s easy to see why there’s interest. His end product still needs work, but his ability to excite is considerable – the 18-year-old has completed more than twice as many dribbles (106) as any other teenager in Brazil’s Serie A between 2019 and 2020. 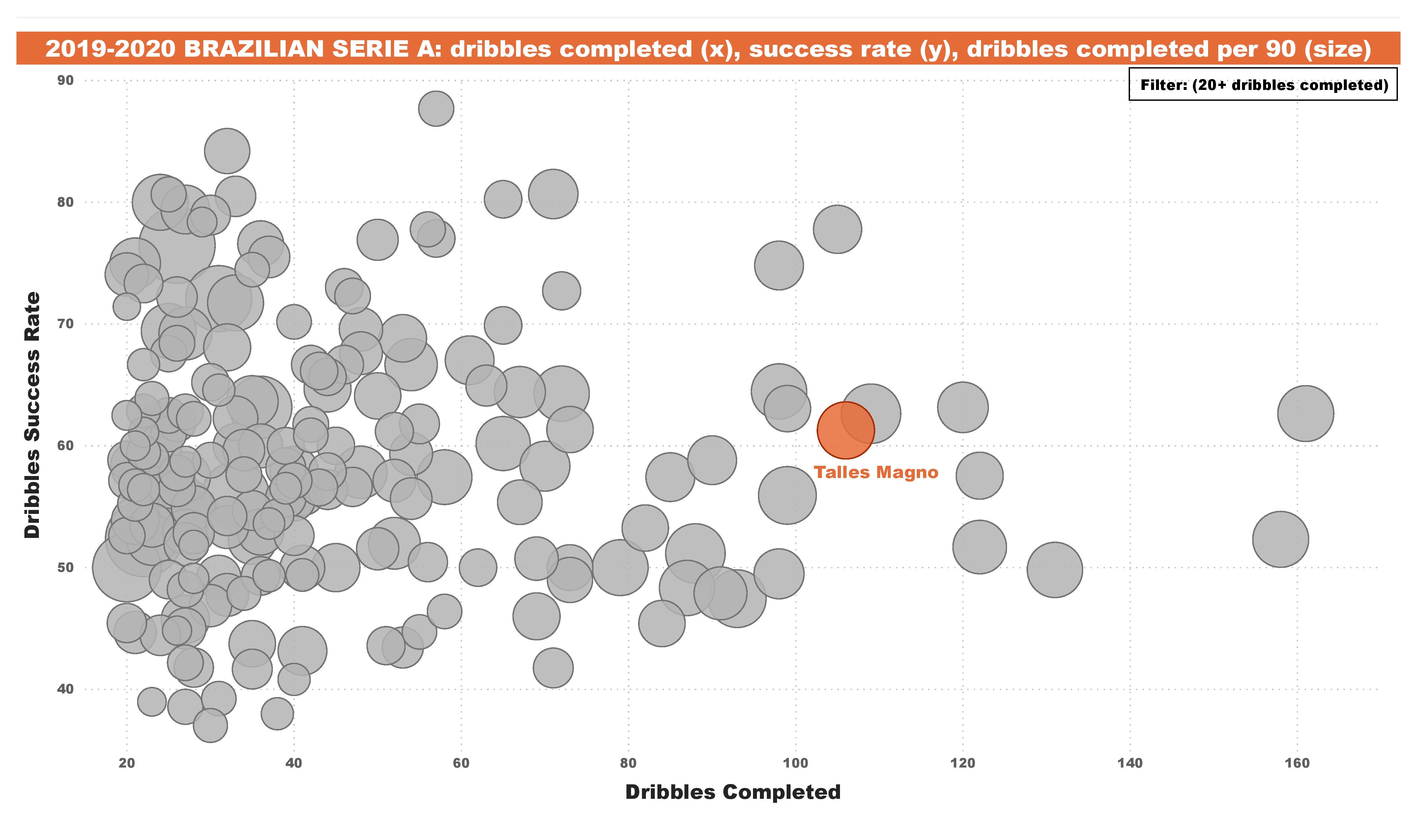 There has been a buzz around Adeyemi for a few years now as has previously impressed scouts with Germany’s youth sides and during a fruitful loan spell at Liefering. Now back at Salzburg, he looks destined to be another serious talent off the club’s impressive conveyor belt. Adeyemi is the only player to have been involved in four goals in a single Austrian Bundesliga this term, scoring and getting a hat-trick of assists in the 8-2 victory over St. Polten, while he set up a goal on his league debut for the club in June. A thrilling talent with great vision and dribbling abilities, Adeyemi may get even greater responsibility in 2021 following the departure of Dominik Szoboszlai.

It’s still early days for Marcos Leonardo, though Santos clearly rate him highly – the striker’s release clause is €100m. He’s already the underage player with the most minutes played (296) and goals (one) in Brazil’s top division this season, while he became the sixth youngest player to net in the Copa Libertadores (17y, 173d) when scoring a winner against Defensa y Justicia.

There’s not much that hasn’t already been said about Moukoko. He became the Bundesliga’s youngest ever player in November when making his debut a day after his 16th birthday, before then also setting a new record for the league’s youngest goalscorer in December. New coach Edin Terzic has already given him two starts – his next target will be to break records on the international stage with Germany. He couldn’t get into their Euros squad, could he?

Stocky, technically gifted and already proving decisive in front of goal with seven goal involvements (five goals, two assists) in 15 league matches, Arezo has a lot going in his favour. Whether he has the mentality or focus to not let the ‘new Luis Suarez’ labels distract him remains to be seen, but he’s already the youngest Uruguayan (17y, 349d) to ever score a brace in the Copa Sudamericana having done so against Atletico Nacional in November.

Royce O’Neale gives Jazz a boost in win over Knicks