We need to talk about Kevin. Because if you noticed something was different about Kevin De Bruyne this season, you were on the money.

The PFA players’ player of the year, the FIFPro World XI star and the reigning Champions League midfielder of the season has been performing a modified role for Manchester City since David Silva departed.

And is it pure coincidence that in this phase of semi-transition, a goal-shy City have scored 3-0, 3-1 and 4-1 wins when starting without their Belgian playmaker, the man who supposedly makes them tick?

De Bruyne is a wonderful footballer, and laying on seven goals in 13 Premier League games this season attests to that, a strong follow-up already to last term’s record-equalling 20 assists.

Supremely skilled with both feet, you feel he could play anywhere and be hugely influential.

But the right flank has been his established station, and this term there has been no such instinctive attraction to that side of the pitch.

De Bruyne is roaming, occupying positions to the left, right and centre as a number 10 in all but number (he remains in the 17 shirt). Opposition right-backs who were rarely closer than waving distance to the City maestro are seeing him encroach on their territory, an unwelcome pest few can handle.

Chelsea, his former club, will not be relishing the task of stopping De Bruyne when City visit Stamford Bridge on Sunday.

But does the 2020-21 deployment truly suit De Bruyne, and more pertinently does it suit City?

TOUCHED BY HIS PRESENCE

Touch maps from Opta show how evenly distributed De Bruyne’s involvement has been in this Premier League campaign.

He’s here, there and in fact he’s everywhere across the attacking midfield zones, and it is hard not to think that is to cover for the loss of the creativity previously provided by close-season departee David Silva, a player whose much-missed promptings were helping to thrust Real Sociedad towards the front of the LaLiga leading pack until injury struck in November.

In 14 Premier League games this season, City have created 166 chances, an average of almost 11.9 per game, but last term they ran up 583 across 38 games, marginally above 15.3 each match.

De Bruyne’s chance creation rate has hardly nosedived, but it has slipped from one every 20.6 minutes in 2019-20 to one every 26.2 minutes this season.

His total of 42 chances created in the Premier League so far (31 open play, 11 set-play) far outstrips team-mates, with Riyad Mahrez next on the list with 23 carved out, followed by full-back Joao Cancelo who has teed up 22 opportunities.

Bernardo Silva was creating chances at a rate of one every 39.8 minutes last term but that has crashed to one every 138.5 minutes in 2020-21, while Raheem Sterling has gone the same way, a slight fall from one every 55.4 minutes to one each 64.1 minutes.

Mahrez is making chances at one every 33.4 minutes this season compared to 32.3 last term, while Phil Foden, long touted as the natural successor to David Silva, has a rate of a one every 84.2 minutes, down from per 49.6 minutes.

Could De Bruyne be inadvertently cramping the style of his team-mates as he spreads his wings across the pitch, inevitably a magnet for the ball? 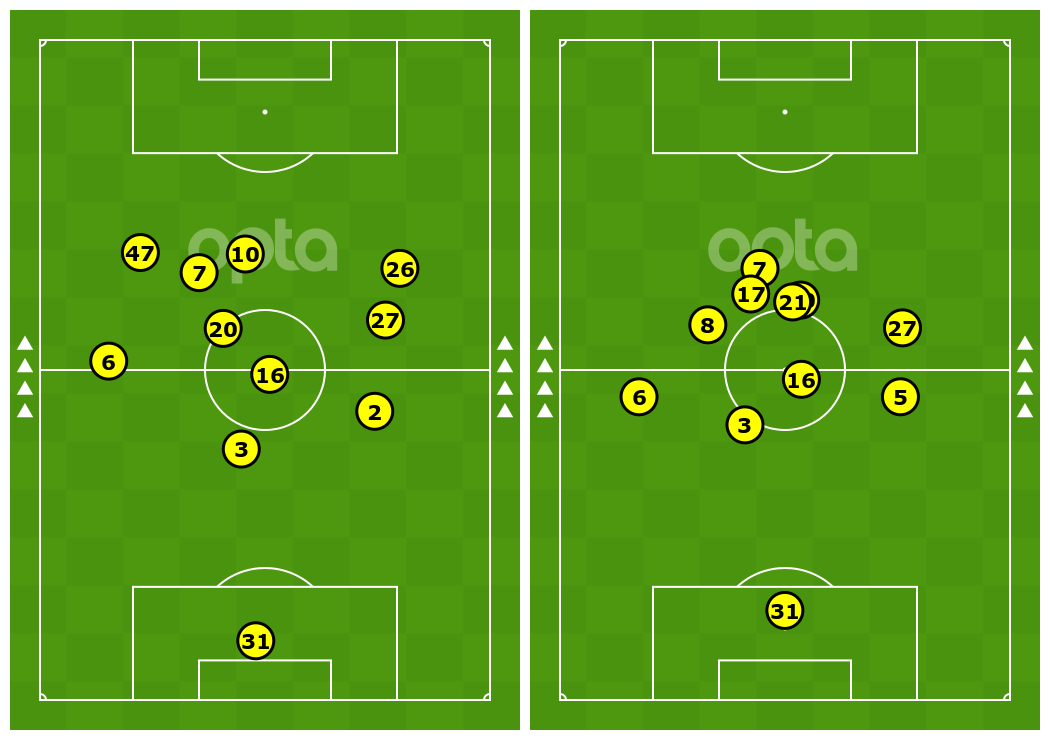 A VIRTUOSO IN NEED OF A BACKING BAND

De Bruyne has missed just one Premier League game this season, the home clash with Arsenal back in October that City won 1-0 thanks to a Sterling strike.

There was little to catch the eye in the chances created (11) or shots (13) columns that day, but City’s attacking midfielders and forwards were noticeably less bunched over the 90 minutes that day than was the case in their Etihad Stadium clash with Newcastle last time out.

For that December 26 fixture, in which De Bruyne played, his average position was tucked in just behind Sterling, with Ferran Torres and Bernardo Silva close at hand.

City won 2-0, but the average position map points to limited midfield width. A little social distancing to ease congestion between the front quartet, as was the case in the Arsenal game, could be in order.

Despite having De Bruyne on board, City created just a modest 10 chances and had 11 shots against Newcastle. Seven of those opportunities were defined as ‘big chances’, though, a season-high for City, so perhaps they are belatedly creating the right quality of opening with their new shape, if not the quantity. Or perhaps Newcastle are ripe for that sort of thing.

While De Bruyne continues in his virtuoso way and can clearly be devastating anywhere across the midfield, the likes of Bernardo Silva and Foden must prompt more frequently. They might be encouraged to do so if City’s strikers were putting away chances with a higher degree of efficacy. It is a two-way road.

WHAT ABOUT THE THUMPINGS WITHOUT DE BRUYNE?

It might be doing De Bruyne a disservice to read too much into City piling on the goals without him, looking at the 3-1 home win over Porto, which he missed with a muscle injury, and the 3-0 box-ticking exercise that was Marseille in Manchester for City’s final Champions League group game.

Arsenal were then under-strength and hopelessly out of form before the 4-1 EFL Cup trouncing they suffered at City’s hands, on December 22.

What the data tells us from City’s season is that De Bruyne’s levels remain extraordinary, but he is now a roving beacon of midfield genius rather than a master of one position.

With this tactical switch clearly coming at the behest of Pep Guardiola, it falls to the City manager to examine the evidence of its impact and make the strategy and selection tweaks that could still make it effective.

Failing that, Guardiola could revert to Plan A.

Many a wide player has coveted a role further infield, and it has not always come for the betterment of the team. Giving De Bruyne his old job back may be City’s easiest get-out.